‘Some people might not make it’: B.C. responds to national housing strategy

The Canadian government launched its long-awaited national housing strategy Wednesday, but Vancouver advocates say the move is long overdue in a city already that is facing record levels of homelessness and an affordability crisis.

Vancouver affordable housing advocates say the move is long overdue. According to Union Gospel Mission spokesperson Jeremy Hunka, it may be too late for some of the 2,100 currently facing homelessness in the city.

The strategy also allocates $4 billion for a national housing benefit intended to provide low-income renters with an annual $2,500-subsidy beginning in 2020.

“There’s a lot of single mothers, a lot of families who are low-income who could really use that subsidy. For it to not come until 2020 means a lot of long, hard years ahead,” Hunka said. “We’re glad this funding is coming, but we’ve got a huge mountain to climb a lot of challenge to overcome until that help is there.”

Vancouver Mayor Gregor Robertson said the city has struggled to have conversations about housing with provincial and federal governments in the past.

“It’s been an embarrassment to not have a national housing strategy as a country and it’s fantastic to see one delivered that has had rigour and has had input from all levels,” he said Wednesday.

“We’ve struggled as a city with provincial and federal governments past who were not at the table with us at the level we needed them and as a result we’ve had record levels of homelessness right across Metro Vancouver, right across our region right now and it’s never been worse.”

“If we’re going to crack the affordability crisis of housing in British Columbia, we need all levels of government working together,” he said at a press conference. “This is a step in the right direction.”

Robertson said the housing strategy shows just how important “urgent action” is for the country.

“We have to treat housing as a human right and it’s critical that our federal government recognizes that and follows through in terms of the monitoring and the reporting on that,” he said.

However, both Robertson and Hunka pointed out that while having a strategy is a good start, targets need to be set to ensure the plan is implemented.

“It’s fantastic to have a game plan,” Robertson said. “We need to take those next steps and take action.”

North Shore Rescue members became the first SAR team in British Colubmia to undergo resiliency training this week in an effort to help them cope with the often traumatic situations they encounter in the field.

“This is something that we need to talk about more regularly. We need to watch out for each other and we need to understand that it’s normal to have these feelings and to talk about them,” said NSR team leader, Mike Danks, calling the program “a huge eye-opener.”

While the North Shore’s mountains, canyons and coast offer countless adventures for outdoor enthusiasts, these environments can quickly become deadly when things go wrong. In 2016 alone, NSR responded to about 130 calls.

Made up of volunteers from a variety of professions, team members might not always be equipped to deal with the psychological toll of what they see while on duty.

On Tuesday, NSR addressed this by participating in a specialized resiliency training program called Resilient Minds developed by the BC Professional Firefighters’ Association.

“I’ve been to a lot of calls in the past and you kind of just shake it off and you move forward but, as of recently, everyone’s got a really busy life, you’ve got a lot on your plate and you go to a call that maybe involves someone that you can relate to your family and that’s when it really hits you hard,” Danks said.

Danks recalled a recent call he responded to when a seven-year-old girl died in Lions Bay. He said his team tried everything they could to save her, but was unsuccessful.

“I went home to my family and I broke down. I had a seven-year-old at the time,” he said. “I was trying to process why this beautiful, young little girl was out hiking with her family, doing a wonderful thing and all of a sudden her life is taken away.”

Now, Danks said NSR members are better-equipped to recognize the signs of stress and trauma in their colleagues.

“This course is about being aware of those indicators and not shying away from someone that may potentially need help,” he said.

Danks also said that family members and significant others can be crucial support systems for anyone who might be experiencing trauma, especially because those are the people who will notice a change in behaviour first.

Now that his team has benefited from the training, Danks hopes other SAR teams will participate as well.

“It worked very well for our team. It was very well-received,” he said. “We believe in it and we really hope this will spread amongst all the other SAR teams in the province because it’s made a big difference for us.” 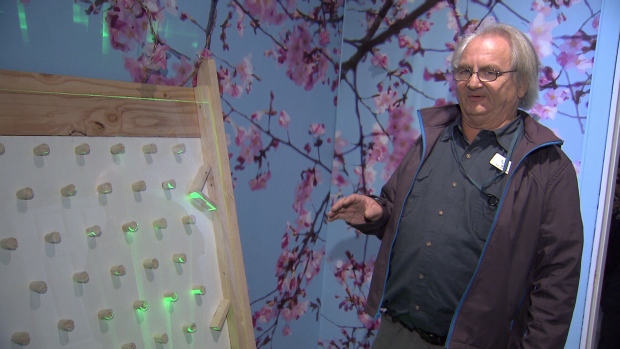 Terry Lawrence helped create Encounter to educate the public about homelessness in Vancouver.

With homelessness higher than ever in Vancouver, a new escape room is aiming to educate the public on the realities of living on the street.

Union Gospel Mission has teamed up with EXIT, an escape room chain, to create an experience that shows many of the obstacles that Vancouver’s homeless face. Escape rooms are games in which players are trapped inside, with a finite amount of time to solve hints or clues in order to find their way out.

Through UGM’s “Encounter” experience, participants will experience homelessness in four different rooms that are meant to mimic the four seasons of living on the streets. Barriers such as poor eyesight, negotiating with different agencies, juggling basic necessities and dealing with pressing emergencies will be illustrated through a series of challenges in the escape room.

“It’s really meant to be an eye-opening experience where people will understand challenges like they’ve never understood before when it comes to homelessness,” Jeremy Hunka, UGM’s senior public relations specialist, told CTV Vancouver. “They’re going to get a glimpse of what it’s like to have to solve problems while physically exhausted.”

Hunka said the idea for Encounter emerged from a conversation about the housing crisis in the city with some formerly homeless Vancouverites. The conclusion of the discussion was that the public didn’t quite grasp how challenging it was to get off the street.

“We decided we needed to tackle that in some way,” he said. “We want [the public] to understand that homelessness is extremely complicated and for people who are homeless, it’s not a choice.”

Terry Lawrence, who helped create Encounter, was homeless for two years and confronted many challenges along his road to housing. Lawrence said his struggles with anxiety made it difficult for him to visit many of the agencies that require him to wait in line-ups and crowded spaces to access services.

“Things like just going to a soup kitchen wasn’t easy,” Lawrence said in a press conference Thursday. “I was trapped with my fear and anxiety. I couldn’t go to social services and say ‘this is where I am, can you give me a hand?’”

Lawrence said he hopes that Encounter participants will gain an understanding of how people become homeless.

“Even though it’s complex of why people are homeless, it gives them different concepts of how it happens,” he said. “There’s a hundred different things that people think about being homeless. I hope we can sort of make an understanding that there’s other reasons.”

The homeless crisis doesn’t appear to be slowing down in Metro Vancouver either. According to the BC Non-Profit Housing Association’s 2017 homeless count, there has been a significant increase in homelessness across the region. Compared to 2014, 828 more people identified as homeless in 2017. Aboriginal homelessness also rose with 34 per cent of all homeless people identified as Aboriginal, compared to 31 per cent in 2014.

Encounter will be open to the public, free of charge, during Metro Vancouver’s Homelessness Action Week from Oct. 8 to Oct. 14. Anyone can sign up at ugm.ca/encounter.